August 31, 2018 – Nashville, TN. John Oates has released his eighth solo project, John Oates with The Good Road Band – Live. Oates is a member of the Songwriters Hall of Fame and one-half of the best-selling duo of all time, Daryl Hall & John Oates. The EP features live tracks from his 2018 tour with The Good Road Band in support of his critically-acclaimed album, Arkansas, and is available on all digital platforms today.

“It’s a joy and honor to perform with this talented group of Nashville players who bring out the best in me and bring it every night,” Oates stated about the band.

The tracks for John Oates with the Good Road Band – Live were hand-picked by Oates from his favorite performances from his recent solo tour. The shows consist of an impressive line-up of Americana musicians, including Guthrie Trapp on electric guitar, Steve Mackey on bass, Josh Day on drums and percussion, Nathaniel Smith on cello, Casey Campbell on mandolin, and Adam Ollendorff on pedal steel. The re-edited version of “Pallet Soft and Low” includes Russ Pahl on pedal steel and Sam Bush on mandolin. With this incredible band, Oates continues to delight audiences with roots, ragtime and blues from the earliest days of American popular music. 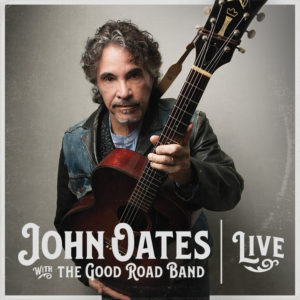 MORE ABOUT JOHN OATES:
John Oates is one half of the best-selling duo of all time, Hall & Oates, as well as an accomplished solo artist. A member of the Rock and Roll Hall of Fame and the Songwriters Hall of Fame, Oates embarked on a long-awaited solo career in 1999. He has recorded eight solo albums and the 2015 DVD docu-concert Another Good Road. Influenced by R&B and folk music while growing up near Philadelphia, Oates was honored as a BMI Icon in 2008. In 2016, Hall & Oates received a star on the Hollywood Walk of Fame. In addition to his solo shows, Oates continues to tour with Daryl Hall, playing sold-out concerts around the world. St. Martin’s Press released the hardcover of Oates’ memoir, Change of Seasons, in March 2017; the paperback version with new content was released in May 2018. Oates resides in Nashville.