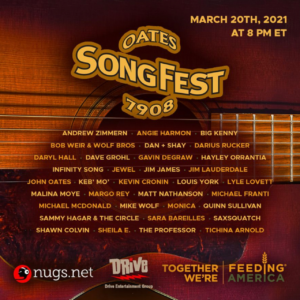 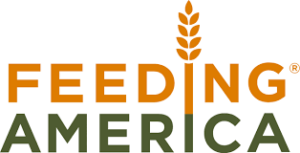 No American family should have to go without food

John & Aimee Oates, Drive Entertainment Group and NugsTV are excited to announce more amazing artists who have recently signed on to perform and raise funds for Feeding America® on March 20, 2021 at 8 PM EST. Sharing duties as John’s co-host will be the mysterious, mystical and musical internet sensation Saxsquatch.

“We estimate approximately 50 million people could face food insecurity due to the ongoing economic fallout from COVID-19 and recovery will be long,” said Feeding America CEO Claire Babineaux-Fontenot. “We are deeply grateful to John & Aimee Oates and all of the participants of Oates Song Fest 7908 for helping to raise awareness and funds to continue our support for our neighbors in need.”

Prior to the show, Nug.TV will stream a special, exclusive, one on one, in depth interview with Grammy winning, super producer Dave Cobb from the historic RCA Studio A in Nashville where he works. John will be talking to Dave about his musical influences and how he records with incredible legendary and award-winning artists to help them realize and record their songs. In addition, over the next few weeks leading up to the show, Oates will be hosting a series of Instagram Live interviews with some of the artists who will be performing.

During the broadcast of “Oates Song Fest 7908” viewers will be able to donate via a unique QR code and at        www.feedingamerica.org/oatesfest. 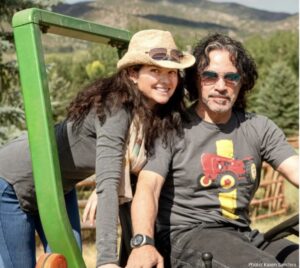